Our guide took us to the airport and brought us to the first class check in. The flight was slightly delayed, but we still had several hours in Chengdu before our next flight to Guilin. We took a taxi to the Panda research base and made sure that nothing was closed before entering the park. We walked straight to the nursery and made a “donation” of 1000 yuan each. This earned us the right to hold, pet and feed a Giant Panda cub. We were dressed up in sterile clothes and waited on a bench while they prepared the panda. It was bigger than expected but not too heavy and very soft and cuddly. The staff took plenty of pictures with both our cameras. We continued to the mother and cub enclosure where three cubs were playing around. Very cute!

We had lunch in the park before heading back to the airport. When booking the ticket to Guilin most flights were full, so we ended up with a first class ticket (still cheap!). The first class lounge was not much to write home about, but we got to check our emails with a chocholate and a cup of coffee/tea on the side. When boarding the plane we got to skip the queues and got our own comfy bus to the plane which was quite nice. The Chinese really dont know how to behave in a queue. Large seats, great food and presonal service was not bad either. 🙂 On the way to the hotel we got our first glimse of the karst topography surrounding this small city (pop 740000).

After a 2 hour bus-ride from Chengdu we arrived in Leshan and took a tour boat to get a panoramic view of the Giant Buddha (Dafo) from the river. The 71 m tall Buddha is carved into a cliff overlooking the river, and with a shoulder span of 28 m and 7 m long ears it was quite impressive.

After getting back to the docks we entered the Giant Buddha park containing several temples, tombs and museums. We walked up the hill to the Buddha”s head and lined up for the steep stairway down the cliff to his feet (each big toe is 8,5 m long!). When leaving the park we found a local bus back to the bus station and were back in Chengdu around 7.30 pm. We walked from the bus station to the hotel and stopped for dinner on the way. 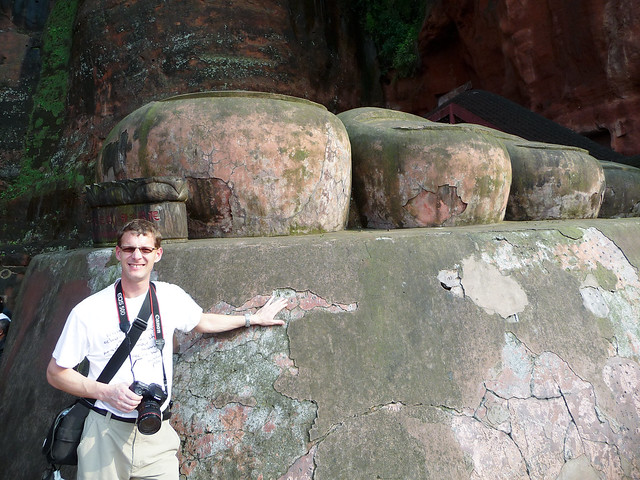 Tomorrow morning we are traveling to Xining, and will catch the train to Lhasa in the afternoon.

We started the day with a huge, western breakfast at a cozy place called Grandma’s Kitchen. We took a taxi to the Giant Panda Breading Research Base, home to nearly 50 giant and red pandas. We only got to see some of them though, because parts of the park were closed off most of the day. Frustrating!

But we got to watch several pandas up close and it was fascinating to see them eat and climb around. One even got stuck hanging upside down a couple of times. At the end of the day we were finally allowed to go to the nursery as well, but it was no longer possible to hold a panda as we had planned. The new born pandas were cute, the smallest one was only a couple of weeks old and had a birth weight below 0,1 kilo.

In the eventing we went for pizza and got to taste our first dark, Chinese beer (Jintebeer). Not bad! We continued to an Irish Pub to give Guinness a try in China as well. Based on the taste we’re pretty sure it’s shipped from Dublin. We met a nice American who was in Chengdu on business, and had a great evening chatting over a few pints.

Most of this day was spent waiting and traveling, but we had time for some city sightseeing in the morning. We walked by the Bell Tower and the Drum Tower before going into the Muslim quarter. The first part was mostly souvenir shops, but we managed to find a more genuine part as well where all kinds of food where cooked in the streets. 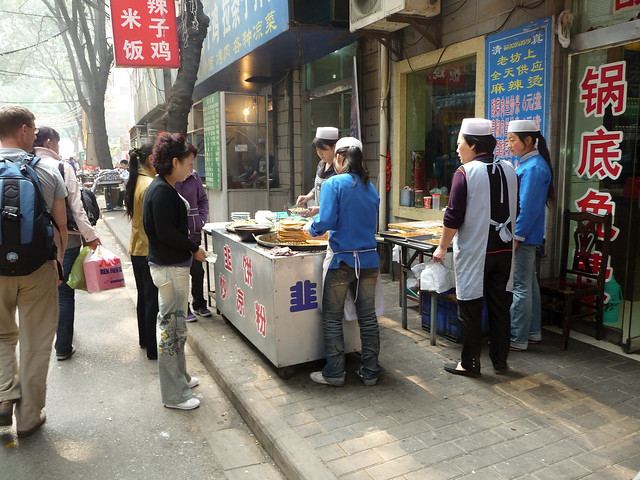 We also stopped at the Great Mosque, founded in the 8th century. Very peaceful and an interesting blend of Chinese and Islamic architecture. The minaret was disguised as a pagoda.

After a lunch buffet (35 NOK) and a beer at the hotel we took a taxi to the airport. Our flight was quite late by the time we reached Chengdu. We also had a little trouble finding our hotel since it was located on the 27th floor in the back of a shopping mall. But both the room and the view was nice.