We stayed one night in Khao Lak, 60 km north of Phuket island, before and after our liveaboard. This way we could repack and only bring our dive gear and a small bag of clothes on the boat. We lived in a cozy hotel, Fasai house, just off the main road. The city was very quiet, and it seemed that most tourists in the area stayed at the various beach resorts. We enjoyed our time there, had time for some quiet shopping, found a relaxed German bar with some import beers, had a lot of great food (springrolls, satay and pad thai in particular), enjoyed some thai massage, had a local tailor fix a ripped bag etc.

The hotel let us keep the room until our pickup at 6.30 pm, and after a short ride in an open truck to the pier we were welcomed onto our home for a week, Deep Andaman Queen. Most people were coming by car from Phuket, so we gathered on the main deck, getting to know the other guests while waiting for everyone to arrive. Several of the people we were talking to realized after a while that they were on the wrong boat though, but by 8 pm our group was complete, we were introduced to the crew and got ready to leave. The thai crew had decorated the bow of the boat for the good spirits, and as we left the pier firecrackers were going off to scare the bad spirits. Our group was quite international with 2 Norwegians, 3 Russians, 1 Dutch living in Switzerland, 1 American living in Japan, 1 Chinese, 2 Singaporeans, 1 Australian and 2 Americans living in China. The 4 dive guides were American, Australian, Dutch and Japanese (private guide). The evening was spent finishing all the paperwork (Myanmar visa, departure cards, dive certifications etc), setting up our dive gear, packing out a bit, getting to know the boat and have a few beers. The next 7 days we did a total of 22 amazing dives, both in Thailand and in Myanmar. We normally had to get up at 6 am, but instructor Tod had the best wake-up call ever, and knowing we were going diving it was actually not that hard to get up. We had some toast or a yoghurt, something to drink and a briefing in the saloon before we were ready to jump in around 7 am. When we got back up the chef had prepared a large, hot breakfast and we had a couple of hours to relax before our next dive, normally around 10 or 11 am. After lunch we had another dive, and normally ended the day with a sunset or night dive. And after that it was beer o’clock, shower and dinner time. What a good life! Our very first dive of the trip was on Koh Bon. This was a so-called test dive, where they see which level everyone is on, and try to create the best groups possible based on that. We were 5 people (the two of us + Tim, Al and Danny) who were both advanced and nitrox certified, and we were in Anne the Dutchie’s group. And what a test dive it was. After a nice start we hit strong currents, and were all low on air and pretty exhausted when we got back up. But we all passed the test, and stayed in the same group for the rest of the trip (except some minor changes on a couple of dives). On our second full day we had a chance to sleep in a bit. Breakfast was not until 9 am, since we were crossing the border to Myanmar and had to spend most of the morning getting through immigration.
4 Myanmar officials boarded the boat to go through everything, and a local guide stayed on the boat for the duration of our stay in Myanmar. On the way back to Thailand 5 days later we even got to leave the boat for an hour. It was a weird feeling to wear shoes (well flip-flops that is) again, and we all had a bit of sea legs. We did some tax free shopping and had a few local beers at Smile restaurant in Kawthoung. 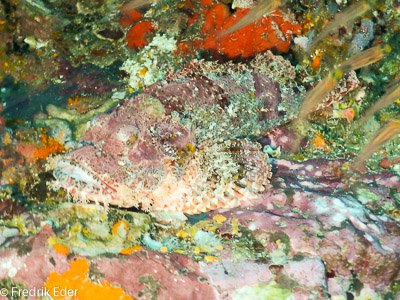 We had to do some changes to the original plan, sometimes because of currents or visibility, but the biggest change was that we had to skip Black Rock due to dynamite fishing, which sadly still happens occasionally here. We still got to dive a lot of great sites though: Koh Bon West Ridge, Tachai Pinnacle, Richelieu Rock, Pratong wreck and Bonsoon wreck in Thailand, and High Rock, Three Islets, North Twin, Shark cave, Square rock, Submarine, Rocky island, Stewart island, Cavern island, Dancer/Holy crab,Frog rock, Fan forest and Western rocky (cave + pinnacle) in Myanmar. Some of the dive sites had so much to see that we did several dives there, and sometimes we returned to a previous site for a night dive, which was a completely different experience. We hardly saw other dive boats our entire time in Myanmar, so we had the dive sites all to our selves. Awesome! We were a bit early to see manta rays and whale sharks, but other than that we got pretty much all we were hoping for and then some. The highlights would have to be the octopus changing color, the frog fish and last but not least our very first sea horse! Mantis shrimps, barracudas, cuttle fish, squids, rays and spanish dancers were also pretty cool. In some of the sites there were so much fish it was sometimes hard to see your buddy, and other sites had so many moray eels and scorpion fish we lost count after a few minutes. Tim brought a large camera, and was showing us a lot of small stuff we haven’t seen before, like different kinds of anemone fish, sea snails, nudibranchs, shrimps etc. We also got to do several cool swim throughs and caves, and test ourselves in a few more currents and surges. The swim through at Tachai pinnacle was absolutely gorgeous with large sea fans everywhere. On Stewart island there was a large swim through with a current taking us on a ride the last part of the way and at the end it really pushed us out and up over a wall. On this dive we also went in to a cave with currents going in all directions in the middle. Anne knew how to time it and went through while the rest of us were holding on to the bottom the best we could. Both Tim and Fredrik tried to get through, but were both thrown back by the currents, and we had to exit where we came in. On Cavern island we went into a large tunnel going into the middle of the island, and out an exit on the other side. Quite some surge and so much fish on the way out it was hard to see where to go. On Western Rocky there’s also a large cave, with a beautiful archway by the entrance and lots of large lobsters along the walls. Also our night dive at Three islets was totally crazy with movement absolutely everywhere. The boat itself was very comfortable. It had 9 cabins of different sizes, with room for in total 16 guests (we were only 13). Upstairs there was a saloon, where we had all our briefings, watched pictures and videos, looked up all the marine life we saw during our dives and relaxed when we needed some air condition. We had a large area with a bar and seating for everyone. This is where all meals were served, 5 per day (if you include the pre-dive mini-breakfast) and so much to choose from every time. On top there was a sun-deck with several sunbeds and some sofas in the shade, and this was also a good lookout to see dolphins and sharks swimming close to the boat. Downstairs in the back was a large dive deck, with plenty of room for everyone to get ready. The crew was so helpful putting our gear on, making sure everything was set up correctly and showering us with water if it got hot waiting in the sun. Tod usually played music while we were getting ready, and our group often had a little get-ready-to-dive-dance while we were waiting for the captain’s signal to jump in. The captain was really good at what he was doing and manouvered the boat onto the exact right spot every time. When picked up after a dive he “sucked” us right in to the ladders without having to swim at all. Impressive! And of course the crew welcomed us, helped us off with our gear, served fruit juice and at the late dives provided hot towels. In the evenings we were all hanging out in the seating area (and a bit in the smoking area in the front), playing music, sharing Norwegian aquavite and other drinks, talking, learning new languages, laughing a lot, sharing dive and travel stories, sometimes even singing and dancing. We were a great group and had so much fun! People are telling us we are getting older, but it hasn’t sunk in yet. We skipped the naps a lot of people took during the day (I’m sure the nitrox helped a bit as well), always went to bed last, had twice as much beer as the rest of the group (yes, the list got full and they ran out of our beer of choice) and were still able to be the first one’s ready on dive deck in the morning. The Thai crew actually named Fredrik “Number one”, and always allowed him to get first onto the boat when getting up from a dive. It was really sad leaving the boat, especially since we were going back to Norway the next day. We took a lot of group photos both under and over water the last day, exchanged email addresses, connected on Facebook, agreed to meet again and said goodbye with a lot of hugs. We really want to do the same trip again, next time probably a bit later so we might be lucky enough to see mantas and whale sharks as well. And hopefully get to dive (and drink) with Anne and Tod again. And a trip to Japan to dive with Tim also sounds like a really good plan. 😉