I did forgot to change the clock on the phone, so I was up 2 hours to early 🙁
we had a schedule to start early so we could see the sites before it was crowded by other tourist (I like solutions like that).

We started our tour with a visit to a site that was not escalated by archaeologist, so it was more or less the same as when Captain Cook visited Easter Island 52 years after Jacob Roggeveen that discovered the island in 1722. All the statues was pushed over most of them face down but some of them faced up.

Our next stop was the quarry, all moai statues where carved out here and then moved around the Island by tree logs and other primitive equipment.
we used a long time on this site and saw a lot of moais, excavated and the ones that we only see the head of. 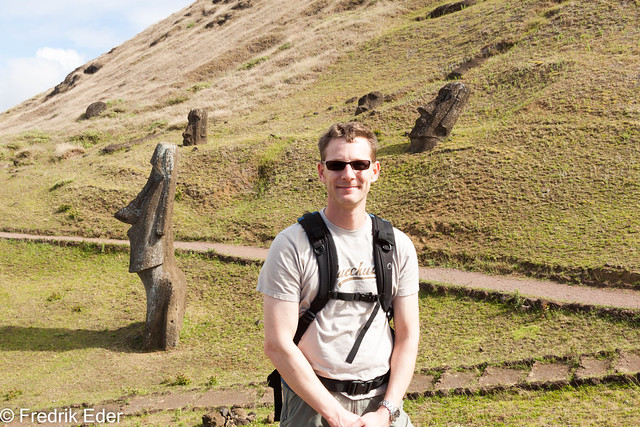 When we were almost finish whit the quarry it started to rain, so we got a bit wet on the way up to the Vulcan crater where they also carved out statues. It was very hard to see anything because of the rain and the mist (you can’t win them all).

The last site before lunch was the amazing Ahu Tongariki witch are the biggest resaturated ahu (stone platforms with moais) on the island. 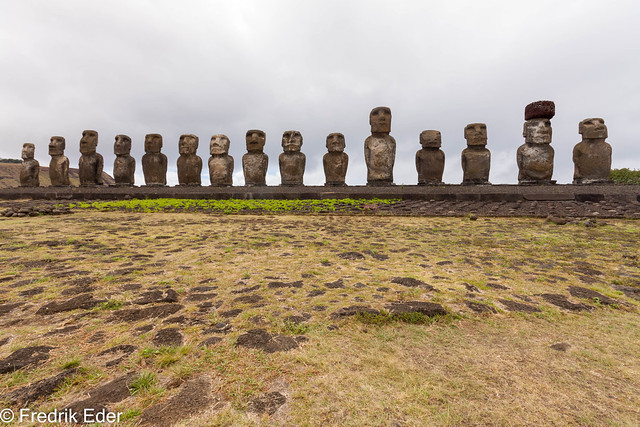 After a very good lunch we went to the beach where Thor Heyerdahl stayed when he was at Easter Island. We looked on a smaller ahu and on a Moai that Thor Heyerdahl decided to rise whit a solution that involved stones, levers and ropes.

Then we had 30 minutes of free time, so most of us decided to have a swim in the Pacific, same temperature as last time, nice again 🙂

In the evening we had ordered a moai show with diner, we arrive early to see the ceremonial opening of the “oven”. Witch was a ditch in the ground where they put worm lava stones in first, then they rap the food in banana leaves and put the food on top of each other in layers. then they close the “oven” with dirt. After they had digged upp all our food, we went inside and had a lovely dinner (I am glad that we had salt on the table).

After dinner there was a show with some short stories and a lot off dancing (I was dragged up on stage to dance with one of the lovely ladies).