Our guide took us to the airport and brought us to the first class check in. The flight was slightly delayed, but we still had several hours in Chengdu before our next flight to Guilin. We took a taxi to the Panda research base and made sure that nothing was closed before entering the park. We walked straight to the nursery and made a “donation” of 1000 yuan each. This earned us the right to hold, pet and feed a Giant Panda cub. We were dressed up in sterile clothes and waited on a bench while they prepared the panda. It was bigger than expected but not too heavy and very soft and cuddly. The staff took plenty of pictures with both our cameras. We continued to the mother and cub enclosure where three cubs were playing around. Very cute! 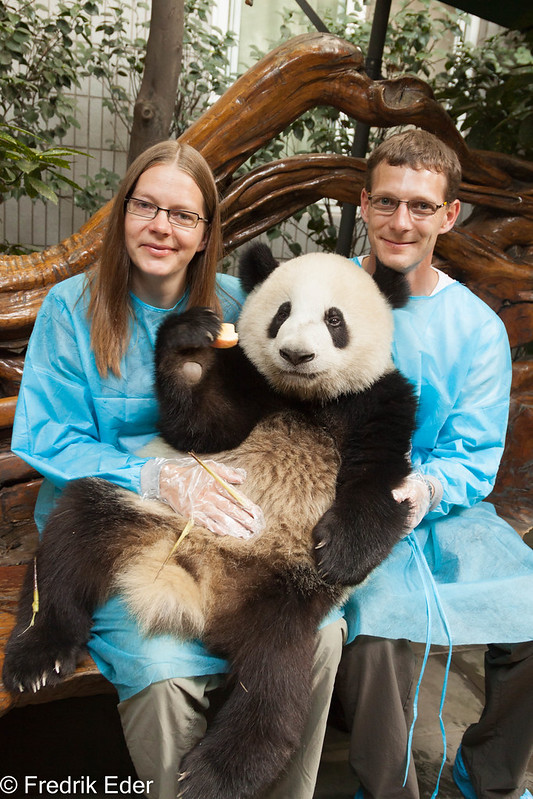 We had lunch in the park before heading back to the airport. When booking the ticket to Guilin most flights were full, so we ended up with a first class ticket (still cheap!). The first class lounge was not much to write home about, but we got to check our emails with a chocholate and a cup of coffee/tea on the side. When boarding the plane we got to skip the queues and got our own comfy bus to the plane which was quite nice. The Chinese really dont know how to behave in a queue. Large seats, great food and presonal service was not bad either. 🙂 On the way to the hotel we got our first glimse of the karst topography surrounding this small city (pop 740000).