Today we got up at 7 am to beat the queues at the Forbidden City. There were still a lot of people, but we got in without much waiting and walked around for a few hours. The renovated buildings in the outer yard were the most impressive, while the narrow and worn-down areas on the sides were the most charming. Beautiful details were found everywhere like the statues, the decorated roofs, the stairs and bridges, the huge doors and the 250 ton carved carriageway. On the way out we tried to get up in one of the towers to get a good view over Tiananmen square, but the lines were insane and we were not allowed to bring any bags, so we skipped it and made an old Chinese man very happy by giving him our tickets.

The Tiananmen Square was still chaotic since it was filled with floats from the parade in addition to several enormous flower decorations and screens showing highlights from the Olympic Games in Beijing. We soon got tired of the chaos and went for a quiet lunch before going to CITS (China International Ticket Service) to try to arrange our trip to Tibet. They could not help us at all and had no idea who could. We contacted a different travel agency wo gave us the email address to a Mr. Liu that might be able to help us with our permits. Still waiting for a response. 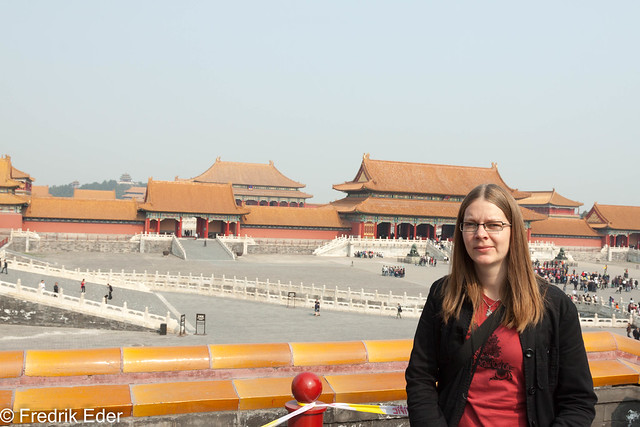 We spent the afternoon in The Temple of Heaven Park. It was very peaceful and quiet compared to where we spent the first part of the day, but there were still a lot to see and do. The park was used for flying kites, playing badminton etc. The main sight within the park was the Hall of Prayer for Good Harvest, built without using nails. The Imperial Vault of Heaven was placed inside a round wall named the echo wall, where you should be able to hear whispering from one side to another. The Round Alter was also impressive, and a bit different from all the Chinese architecture we have seen the last few days. 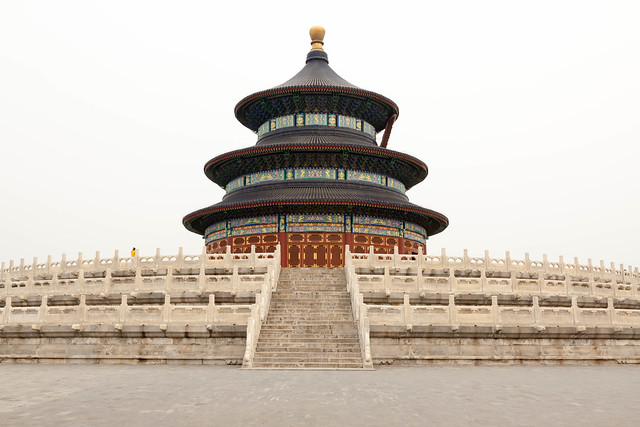 In the evening we tried to take a taxi to Nan Luogu Xiang where there are plenty of small bars and restaurants, but all taxis were busy. After a long time and a long walk we finally saw someone getting out of a taxi and we were on our way. But the whole city was one big traffic jam, so we spent 30 minutes on queues and detours. It was quite an interesting experience though, with people leaving their cars on red lights to ask for directions and driving on the wrong side of the road or in the bisycle lane. We had dinner at a small pizzeria and stopped at a bar for an Irish Coffee on our way home.