After a small taste of the huge breakfast buffet we were picked up by our taxi for the day at 8 am. For the first time so far in China the taxi driver actually spoke some English and tried to tell us a bit about the things we saw on the way to the Hanging Monastery. We also stopped to visit an old man living in an even older cave. Last year he even got electricity and a TV.

We arrived at the Buddhist Hanging Monastery at 0930, before the big crowds. The Monastery is more than 1400 years old and is built hanging off the cliffs about 50 meters above ground supported by long stilts. It was very impressive from below, but walking on the catwalks was a bit sceary since they were narrow and the fences were built for small Chinese and not tall Norwegians. 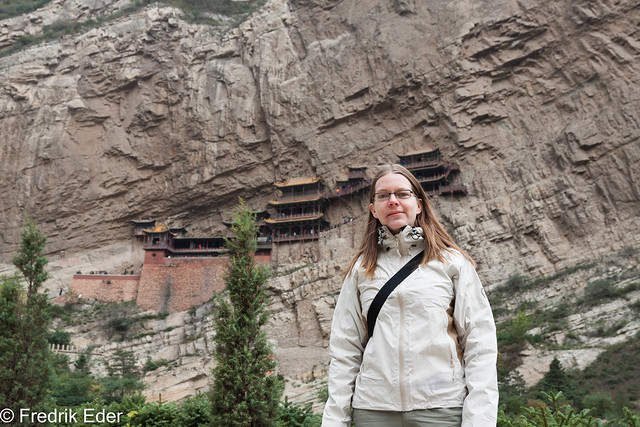 Our next stop was the 5th century Yungang Caves containing 51000 ancient statues. The carving of the caves has combined the Indian Buddhism and the Chinese traditional art. The statues are from a few centimeters high to 17 meters and they are all very impressive! They were renovating the area around the caves and building a huge park, so this will probably be an even better tourist destination in the future.

Back in Datong our taxi driver dropped us off at his favorite noodle restaurant, and we managed to order even if the menu was in Chinese and the staff hardly knew an English word. Great lunch! In the afternoon we stopped by some of the downtown sights like the Drum Tower and the Nine Dragon Wall – a 45 meter long glazed tile wall built in 1392.

Tomorrow we had planned to go to Beijing by train, but we decided that it was a lot easier to book a flight online than to try to get train tickets. Also we pretty much get an extra day in Beijing since we’re taking a morning flight.