We were served breakfast in the room in Paracas before heading to the harbour and meeting our group for the boat ride to Ballestas Islands. We were approximately 30 people on the boat, and our great guide Leo Reyes made sure we got good seats. On the way out we saw a large group of dolphins, lots of large peruvian pelicans and other birds. We also got plenty of wind and salt water in our hair.

Ballestas Islands have many arches and caves and the number of birds are overwhelming. They produce nitrogen-rich guano (seabird droppings) which is used as a fertilizer. In the mid-19th century guano was Peru`s principal export! We also saw lots of sea-lions, crabs and penguins. On the way back we saw the Candelabra geoglyph, a gigantic figure etched into the sandy hills. And then we ran out of gas… 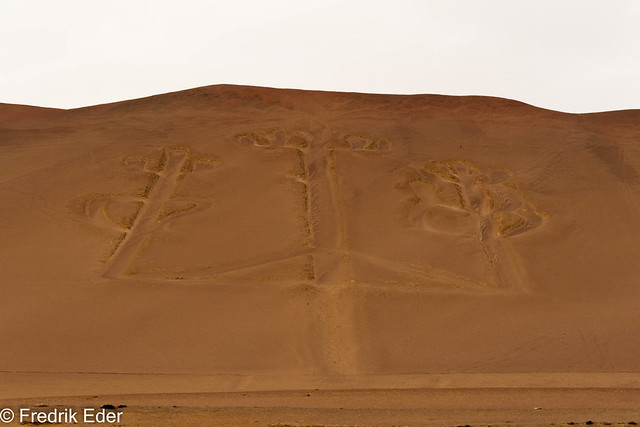 Safly back in Paracas we continued our private tour to Ica where we went to a small bodega (winery). We had a very interesting tour of the winery which still used old techniques like pressing the grapes by foot. Afterwards we got to taste different wines, piscos and marmelades, and ended up doing a little shopping.

The next stop was Huacachina, a small oasis in the desert. We attacked the sand dunes in a small dune buggy and stopped a couple of times to sandboard down the dunes. Fun!

We had lunch and a walk around the oasis before we hurried towards Nasca to visit the Palpa and Nasca lines watch towers before sunset.

We stayed at Hotel Majoro, previously a hacienda founded by the head chief of the valley. Most of the evening were used to try to get rid of all the sand in our clothes, hair, ears etc.