After a short flight to hot and humid Puerto Maldonado we were picked up by our guide Leon. We stopped at an animal conservation centre before we started our journey by boat down the river Madre de Dios. On the way we saw lots of colorful birds and a white cayman (peruvian alligator). On the boat we were served an ecological lunch served in large leaves. After about 1 hour boat ride we left the river and walked 3 km through the rainforest to Lake Sandoval where we spotted a sloth (dovendyr), a very rare anteater, lizards, birds and lots of butterflies. Sandoval Lake Lodge was located on the other side of the lake and we were paddled across in traditional canoes. 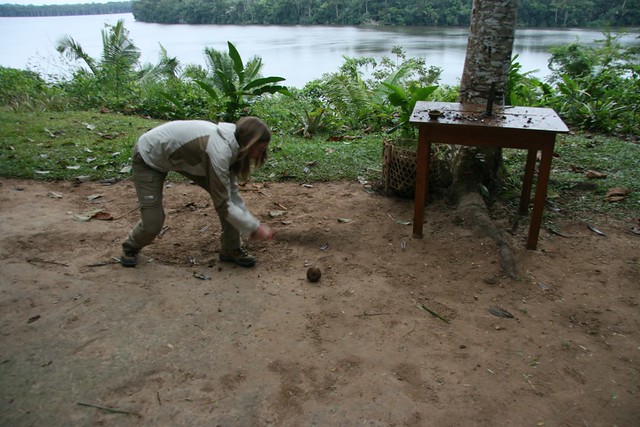 The lodge itself was beautifully integrated with the surrounding nature and could hardly be seen from the lake. At the same time it was quite luxurious and had a fantastic view. We stayed two nights at the lodge, met a lot of great people and went on several walks and canoe trips. The most facinating one was probably the night hike where we used flash lights to spot small and large spiders, tree frogs and other small animals coming out at night. The garden of the lodge was also very interesting. Two large tarantellas lived just outside our room, and in the garden we also found a lot of rainforest plants. Some of them were used for food and some for medicine, and we were able to both taste and smell them.

Most people took the same route back to Madre de Dios, but our guide asked us if we wanted to walk through the rainforest instead of going in canoes. It was a beautiful walk and we saw plenty of monkeys, parrots and macaws. We had a breakfast picnic and caught up with the rest of the group by the river.